The Box Office and Administration Office are closed the following holidays:

Decades in Concert® Spirit of the '60's 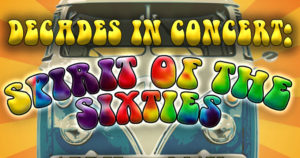 The Downtown Cabaret in partnership with Family Entertainment Live presents the second installment of our original Decades in Concert series, Spirit of the Sixties! Following the huge success of Sounds of the Seventies, this production transports audiences back to the 1960s to revisit the sights and sounds of the era that changed EVERYTHING. Using music from some of the most prominent and influential artists of the 60's such as The Rolling Stones, The Who, Bob Dylan, Janis Joplin, The Band, Crosby Stills & Nash, Aretha Franklin and The Beatles plus many many more, Decades in Concert: Spirit of the Sixties tells the story of the history and culture of America from JFK to the Apollo Moon Landing and everything in between. This amazing performance with a talented cast and pre-recorded music will immerse you in nostalgic multimedia and transport you back to the decade that changed America and defined a generation!